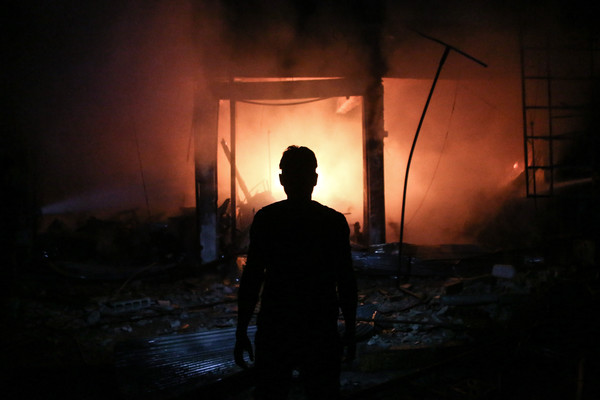 Your love is fire, the Egyptian love song from the sixties, accompanies the Syrians in this play, it haunts them while they try to survive in this pointless, hopeless war, which does not seem to end. Hala and Rand share a small apartment in Damascus. The ongoing war has gotten very close. Hala confesses to her friend Rand, that she wants to leave Syria behind, heading towards Germany. Rand wants to join her, but not without her boyfriend Khaldoun, a soldier in Assad’s army. Thus, both women urge Khaldoun to desert and leave the country with them. But Khaldoun is afraid to do so – he fears for his life, his family and does not know what a future the West might hold. Amidst a quarrel between the protagonists, the role of the author suddenly enters the scene, interfering with the very story he is writing.

Syrian author Mudar Alhaggi writes about the harsh reality of the war in Syria. Step by step, he becomes part of his story.

The ancillary format FOCUS FUTURE I will be offered for the performance.
This event features ancillary programming in association with Theater Scoutings Berlin. You can find more information at www.theaterscoutings-berlin.de.

As an interactive space, the TAK is open to new ideas, vibrant exchange and exciting controversies. Creative events, such as theatrical and literary performances, concerts, discussions and readings can take place indoors as well as in the adjacent outdoor court; supported by state-of-the-art technical equipment. In addition, the location offers a rehearsal stage of 100 square meters. The TAK Theater im Aufbau Haus shapes the nightlife of the Aufbau Haus as well as its neighbour the Prince Charles Club.