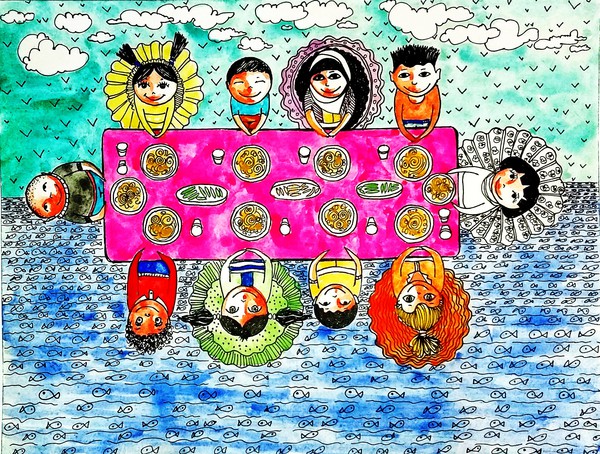 You and Me and Us (Sisyphos, der Flugelefant (SdF))

Glückshausen? What is it? Where does it locate? How does one even get there?
By all theatrical means, the independent performance group SdF embarks on a journey to Glückshausen with the children from refugee shelter. What have we experienced on the road? Have we even made it to arrive in Glückshausen? You will only know the answer by coming to “You and Me and Us”. And who knows, maybe our journey would still be ongoing and you could travel along for a bit with us?

Tickets:
Tickets.de
Reservation:
Phone: 030 20235291
Price: 9 €, ermäßigt 5 € (ggf. zzgl. VVK Gebühr)
**ZUsammenKUNFT is located at an emergency accommodation center and requires an event password for the entry, which can be found at the printed online-ticket or will be notified by phone for those with ticket reservations.
Announcements:
Premiere: June 17, 2017 The event on 18.06.2017, 3pm features ancillary programming in association with Theater Scoutings Berlin. You can find more information at www.theaterscoutings-berlin.de.
Dates:

“Sisyphos, der Flugelefant” (SdF) is an independent production group, founded and led by the director Chang Nai Wen in Berlin. With a wide range of projects from theater and site-specific performances to Live Art, from documentary films to sound-space-video Installations, SdF's working principles have been direct, interactive and collaborative. At various venues in cities such as Berlin, Leipzig, Feldkirch, New York, Rome or Taipei, SdF has created all kinds of immersive “playgrounds” that enable communication between performers and spectators and among audience members and generate dialogue about important yet rarely talked about social and political issues.