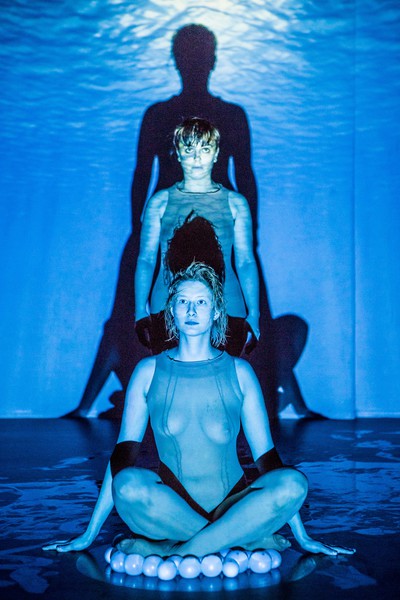 TOODRYTOCRY is a theatre-performance and the result of a 2016 residency at Theaterhaus Hildesheim. It examines the connection between femininity and fluids, which are historically perceived to be dangerous or threatening, and demonstrates their impact on the concepts of the “Volkskörper” (racial corpus) and the masculine soldier.
A significant part of the performance are the mythological representations of women like nymphs, sirens, mermaids and other archetypes that connect femininity and water. Metaphors of floods, torrents, swamps and waves are often used to simultaneously discredit and feminize an enemy that is perceived to endanger a masculine national corpus or rather the construction of it.
Moving between two separate planes of representation, the two female performers place their own bodies at the centre, transforming them into the intersection of labels and ascriptions. They take on the roles of mermaids and marble statues, explore body images and reduce them to absurdity. TOODRYTOCRY follows two previous performances focussing on the mechanisms of collective distinction.

Sanierte Altbauen was founded in Hildesheim by Eva Hintermaier and Sarah Kindermann. The duo develops theatrical performances, as well as room and video installations and usually takes up one core topic over several projects.

Intersectional feminism is a constant theme of their work. Furthermore, a key element is the relationship between them not just as performers, but as friends. Through theatrical tools, arising questions and conflicts become intertwined with the creative process.

Since 2016 Sanierte Altbauten participates in the Mentoring Program of the Berlin-based Performing Arts Programm. Their next work will be staged at Ballhaus Ost Berlin in march 2018.