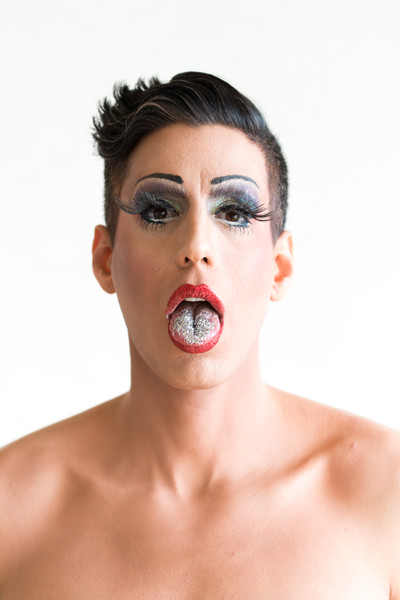 „I used to be afraid of drag queens.“

DRAG started the day I had to sing the role of Papageno in Mozart’s The Magic Flute and the makeup artist showed me how I should disguise my masculine features. (No idea what he was referring to). Or rather, let’s start again, drag started that time the third director I got to work with in Germany yelled my way during a rehearsal, “Man up and don’t be afraid of girls”. – So I became one. Or drag started when cave men wore their females’ fur – or did it start when I moved to Berlin in the freezing winter cold and all I had was a fur coat (vegan). Or when I met Kiki in NYC who introduced me to Ru Paul’s Drag Race. Or the first time I started addressing myself with female pronouns (only when I was upset at myself though). I used to be afraid of drag queens.

Shlomi Moto Wagner is Mazy Mazeltov, is Wendy Williams, is Wisława Szymborska, is Fran Drescher, is Hélène Cixous and her Medusa is David Copperfield and Claudia Schiffer IN ONE BODY! And much, much more.
So, what is reality here and what is fiction? In times where a part of society wants to return to the gender roles of the 1950s, or even the 1940s, it is that much more critical to celebrate festivals of the imagination. Let’s make magic. And what comes out at the end? A concert, a drag queen musical, a monologue slam, a magic show, a bar mitzvah or simply a party with the people?
Are the props ready? Powder, lipstick and glitter? All right!

Shlomi Moto Wagner has performed as a soloist with orchestras around the world: amongst others, he has performed with the Jerusalem Symphony Orchestra IBA and the Rishon Lezion Symphony Orchestra. In 2016, he recorded with the Deutschen Filmorchester Babelsberg (the German Film Orchestra in Babelsburg). He lives in Berlin and works with numerous opera ensembles and experimental theater makers. He is the founder of House of Mazeltov, a drag performance group, with which he explores the performative limits of voice, gender, tradition and identity.