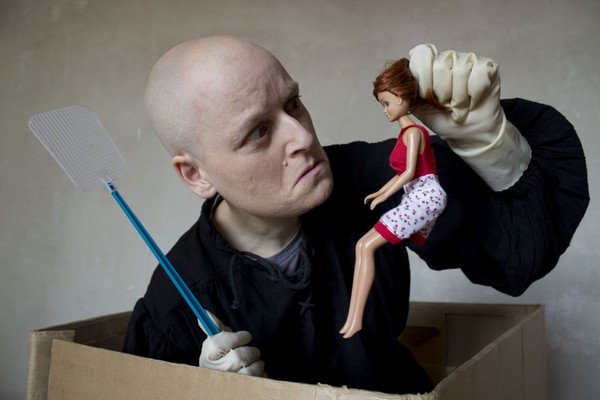 räuber in the box (Bridge Markland)

Friedrich Schiller's The Robbers for the pop music generation

Using puppetry and lip-syncing, Bridge Markland transforms Schiller's classic Sturm und Drang tragedy into a fast-paced, one woman show. Rebellion, envy, tragic love, stub-bornness, hero-worship and desperation are all themes of the play. Markland underscores Schiller's dramatic words with clips from 155 songs ranging from Wagner's “Ride of the Valkyries” to Lady Gaga's "Pokerface", from Ennio Morricone's hit "Once Upon a Time in the West" to the theme from "Dallas". Bridge Markland uses various puppets and dolls as her opponents including Ken and Barbie plus an original nutcracker from the DDR. Being an expert in gender switch, she plays eight men and one woman. Markland also created an English version of this play which she has toured in the US in-cluding Brown and Yale universities.

The Berlin performer Bridge Markland is a virtuoso of role change and transformation. She is an artist who effortlessly crosses boundaries between dance, theatre, cabaret, gender performance, childrens and puppet theatre.
Her specialtiy are one-woman-lip-sync shows of classical German theatre pieces using pop music and puppets. Faust I/Goethe, The Robbers/Schiller, Leonce and Lena/Büchner.
With her incredible talent for transformation she performs all the roles, sometimes as hu-man being sometimes as puppet. She edits the texts and enhances and contrasts them with the fitting pop music snippets. Her performances delight people of all ages starting at 13 years old and have been toured in Germany, Europe, Canada, USA and Australia.