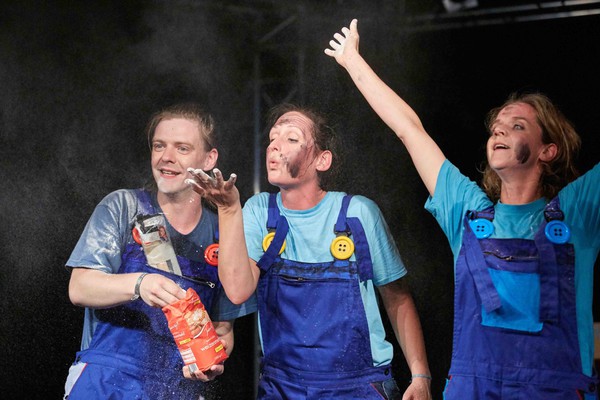 Imagine you could spend one night at the supermarket – what would you do? Imagine you could give everything you find in there a shot; what would you play?
Three children have themselves locked up in a supermarket after closing time. They discover and reenact the story of „Max und Moritz“ in a very particular way: using slapstick and sitcom, movement and theatre of objects, puns and music , this performance becomes an instant invitation to celebrate the anarchy of playing!

In Co-Production with Culture Summer Garmisch-Patenkirchen

KOLONASTIX- theatre for children and young people - was founded by Florentine Schara, Juliane Torhorst and Angela Hundsorfer in 2010. Our first production,„the fearsome Five“, was based on a graphic novel by Wolf Erlbruch, followed by „the little Ghost“(2013) and „Max and Moritz“ (2016).
Each production is devised and directed collectively by the artists involved.
With everyone of us working in a variety of fields of the performing arts the collective unites actors, directors, choreographers, musicians and performance designers.
With our work we aim to encourage children to question the given authorities and to stand up for their rights and needs.
KOLONASTIX produces theatre FOR children - the kind of theatre that takes them seriously and yet is fun to watch for children and adults.