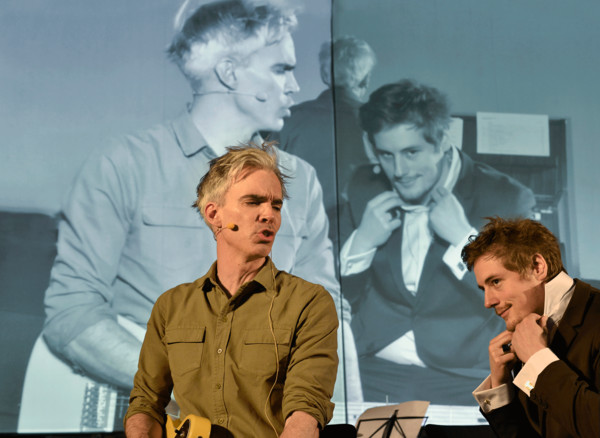 ...I could be you, you could be me...
“In contrast to you” looks at how much we value freedom today, seeks out the power to be found in differences and starts the investigation off with itself: Two men meet on stage. One is still a drama student, the other has been a tenor for years. One is outspoken and confrontational, the other is melancholic and pensive. In search of contrasts, both characters examine their patterns of thought and behaviour and in so doing reflect more and more the big questions and moods of our time. How much freedom do we have to be “different”? How difficult is it to protect social freedom?
In contrast to you is a tender concerto with a loud counterpart. Ted Schmitz, a long-standing member of the Navigators ensemble, has composed his own songs, which will be heard on the night for the first time. Having folk and country elements, his songs lead listeners into a figurative world that lies somewhere between levity and melancholy. Again and again, Fabian Kulp uses Navigators-style verbal attacks to set a counterpoint and bring the music of an optimist face to face with turbulent world events. In contrast to other productions, with this work Nicola Hümpel asks whether art today is still allowed to move away from political questions and lets world events have an impact on her actors.

Premiere: 14.06.2017
The ancillary format FOCUS FUTURE II will be offered for the performance on 15.06.
The event on 16.06. features ancillary programming in association with Theater Scoutings Berlin. You can find more information at www.theaterscoutings-berlin.de.

A production by Nico and the Navigators. Funded by Fonds Darstellende Künste and the state of Berlin. Premiered during the Performing Arts Festival Berlin.

» Nico and the Navigators