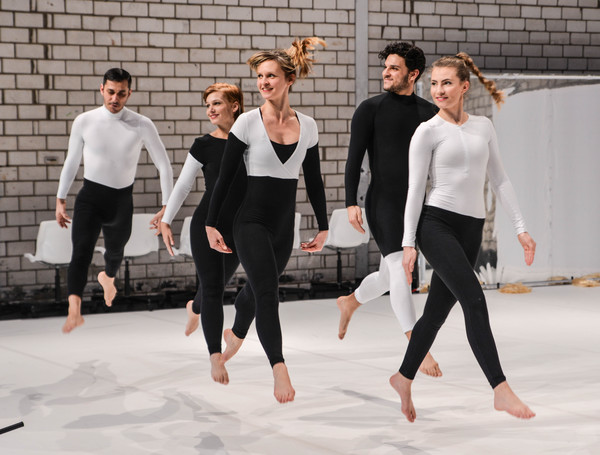 Lights on! Cellphone off! The New Company is here. The company members shamelessly sample and quote, they copy and steal. Looking to establish her own artistic expression, Helen has found the right companions: Angela, Guy, Edda, Giovanni.
What is the unmistakable element that characterizes them? What is the company aesthetic that differs from other groups? What do they want and what can they share with the world? They throw their bodies together, they play “spin-the-bottle” and push limits of the imaginable. With great hopes to create an unforgettable group performance, they dig up choreographies, ideas and visions of their idols and old masters. In addition to swarms of birds, Flashdance or the Nelkenline of the Wuppertaler Tanztheater also other grandmasters find their place in the show.
Out of the big whirlwind of their wishes and unrivaled masterpieces, torn between a longing for community and a need for individuality, Helen Schröder and her company constantly create new versions of their own company’s future.
'Beach Birds – the Dancical' is a 60 minutes dance performance, which challenges our romantic longing for togetherness, in a world that puts the ego first. Trying to find a group model of the future, the company continues to look back at a time when dance and movement represented social utopias and visions that differ greatly from the current one of owning a McFit membership.
Let’s stand with the five performers on the shoulders of our dance giants and enjoy the view.

A production by Helen Schröder in Co-Production with K3 | Tanzplan Hamburg,
Funded by the Hamburg Department of Culture and the Hamburg Culture Foundation.