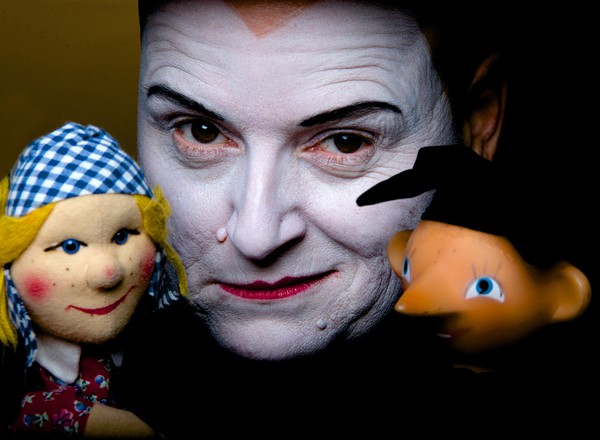 faust in the box (Bridge Markland)

Scientist Dr. Faust is searching for ultimate knowledge and fun. Mephisto appears - who can fulfill any desire, but Faust has to sell him his soul. In this fast paced One-Woman+Puppets-LipSync Show Bridge Markland quick changes between Faust, Mephisto and Gretchen. Additional characters are performed with hand puppets. J.W. Goethe’s famous theatrical texts are collaged with quotes from well known pop songs. Roy Orbison sings “Pretty Woman” when Faust first sees Gretchen. Elvis coaches the inexperienced girl with “Falling In Love”. To which Madonna sings: “Like a Virgin”. This love story doesn’t have a happy end in this version either, but is a lot of fun for the viewers. Bridge conjures a fresh new Faust out of her box and gives a completely new look at some famous pop songs aswell.

The Berlin performer Bridge Markland is a virtuoso of role play and transformation. Effortlessly she crosses boundaries between dance, theatre, cabaret, gender performance and puppet theatre.
Her specialty are One-Woman+Puppets-LipSync-Shows of classical German theatre pieces. Faust I/Goethe, The Robbers/Schiller, Leonce and Lena/Büchner. With her unique talent of transformation she performa all roles either as human being or as puppet. She edits the texts and supports and contrasts them with fitting quotes from well known pop songs. Her performances delight people of all ages from 13 years on and have been toured in Germany, Europe, USA and Canada. Faust and Robbers are also available in English versions.