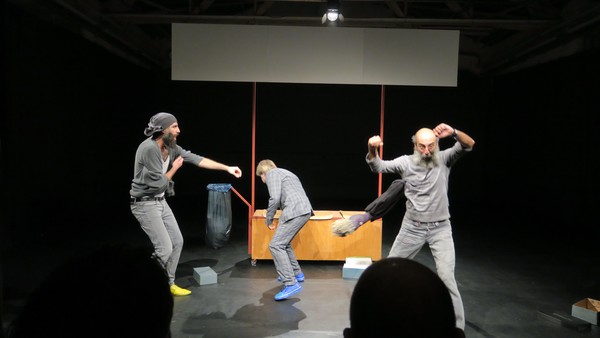 A strong play full of comedy and tragedy about the situation of Turkey, and the yearning to understand one another. At a bus stop, in the middle of nowhere, a Turk, a Kurd and a German meet. As a dangerous storm is coming, they want to leave the country. While engaging in an increasingly absurd dialogue, it slowly becomes evident that the bus will never arrive.

Wed.
21:00
ca. 65 Min.
Thu.
19:00
ca. 65 Min.
Venue:
Theaterdiscounter, Klosterstr. 44, Mitte, 10179 Berlin
BVG: U-Klosterstraße or S+U Alexanderplatz and U+S Jannowitzbrücke + 5 minutes by foot. Unfortunately, we can only accept payments in cash. Note on accessibility: we ask our guests to contact us in advance to clarify any questions of accessibility.
Wheelchair accessible (Information provided by the organisers.)

Frank Heuel founded the fringe ensemble in 1999. Since the 2004/2005 season, the fringe ensemble (along with the dance company CocoonDance) directs and performs in the Theater im Ballsaal: from its beginnings until today, 50 fringe ensemble productions have emerged under the artistic direction of Frank Heuel and continue to be shown in Theater im Ballsaal. In addition, fringe ensemble has organized numerous guest performances bringing the highlights of the independent performing arts community to Bonn. In cooperation with other theaters, event series have been developed and staged in Theater im Ballsaal.
Since 2001, fringe ensemble has repeatedly sought and realized international collaborations. These co-productions have always been defined by both the partner institutions and the collaboration with the artists from each country. It has created four productions with Dutch artists and theaters, two Latvian and one Swiss production. Rehearsals and performances have taken place in both Germany and the partner country, with artists from both countries on stage, performing in both languages.
Festival appearances include: Theaterfestival Ruhr, 2002, Dortmund – auawirleben, 2004, Bern – Politik im Freien Theater, 2005, Berlin – Theaterzwang, 2005, Dortmund – scene: estland lettland littauen in nrw, 2006, NRW – favoriten, Geschichten für das neue Jahrhundert, 2006/2007/2008, Düsseldorf, Münster, Leipzig – 2008, Dortmund – Biennale Bonn, 2008, Bonn – Geteilte Geschichten, 2009, Düsseldorf – Deutsche Geschichten, 2009, Leipzig – Soldaten, 2010, Bremen – Statements, 2010, Münster

Theaterdiscounter, or TD for short, is a theater located at Alexanderplatz with a year-round schedule of programming. The schedule of programming is dedicated to contemporary spoken word theater. Some 30 to 40 different productions, formats and festivals can be seen each season. To make this possible, TD cooperates with artists, theater collectives and partner theaters throughout Germany and internationally. At TD, experienced theater makers create theme-centric pieces of theater that expand aesthetic formal languages. As a theater and production location, we also provide a platform for the next generation of artists. A flexible space concept allows research into new presentation forms for live art and theater in all of its facets.