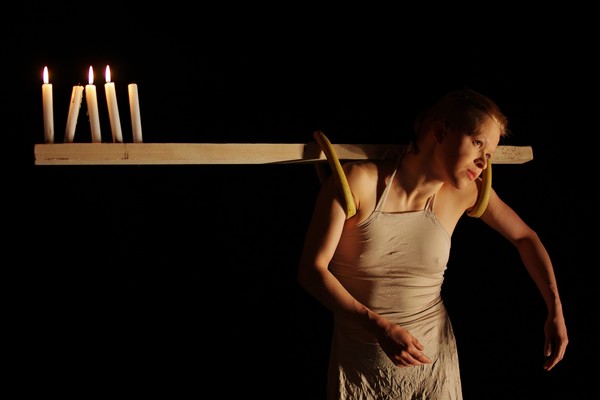 This performance is a web of connections between a performer, an audience and environment in order to create a playground where small events may happen. It is created by a number of consistent small tasks with an open end for a performer, an audience and environment. This is an attempt to merge a happening and a theatrical piece, to create a fluid performative space that is open for events.

Evgenia Chetvertkova is a dancer, choreographer and performer. She began to dance in early childhood and received her initial education and stage experience with the Troitsk dance ensemble for young people (ballet and folk dances). While studying psychlology at Moscow State University, she moved towards more contemporary and improvisational forms of dance and theater. After graduatin in 2007, she took part in performances of the Derevo Theatre and began her own experiments in dance, physical theater and the visual arts. Being a member and later choreographer for the Russian PoemaTheatre dance theater over 6 years, she developed a unique practice and created over 10 choreographic pieces. Some of them were presented in Berlin in 2015 and 2016. She began her Master’s studies at HZT in 2017.

ACUD Theater in Berlin's Mitte district has been a place for young, innovative and diverse theater since 1990, building bridges between acting, dance, performing art, clowning and puppetry. As an independent theater, it supports national and international theater pieces by young groups and solo artists. Each year, around 120 performances take place in the 70-seat theater, with 90% of them being new productions, Berlin premieres or world premieres.