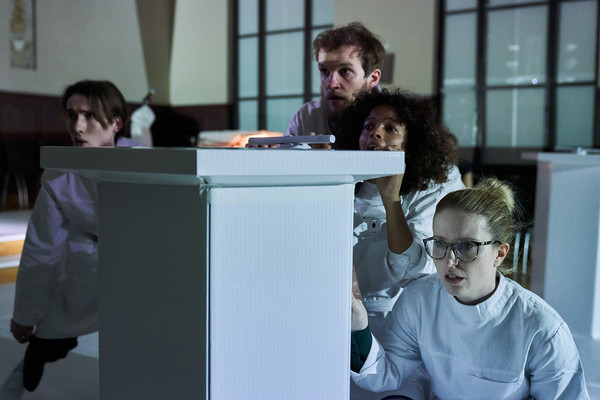 Constructed in 1913, the building was intended originally to be both a home and a school for Jewish orphans. During World War Two, the SS issued passports here while in the GDR it housed the embassies of Poland and Cuba over the years before being left to fall into disuse and disrepair in the 1990s. A team of four international experts now focuses on this house as their new research objective.

OfW, Ohne feste Wohnsitz, the German legal term for “without permanent residence”, is a union of theater makers in Berlin. The reality of our everyday lives is shaped by cultural and linguistic diversity. We want to use both to tell stories set in a complex world where we can communicate everywhere but feel at home nowhere.

Constructed between 1912 and 1913 and designed by the architect Alexander Beer, the building was intended originally to be both a home and a school for Jewish orphans: The 2nd Jewish Orphanage of the Berlin Jewish Community. In December 1942, this home and school was, however, shut down by the National-Socialist regime. After the war's end, the building was again reopened and reoccupied over the years by various institutions such as the Embassy of Poland and Cuba. After the fall of the Berlin Wall the building was again left to fall into disuse and disrepair. That is, until 1999, when it was acquired by the Dr. Walter and Margarete Cajewitz Foundation and subsequently restored. Today, the Former Jewish Orphanage of Pankow houses both the Janusz Korczack Library, as well as the comprehense school SchuleEins. The heritage building strives to be a place of meeting shared between generations, a place working to preserve both history and memory.