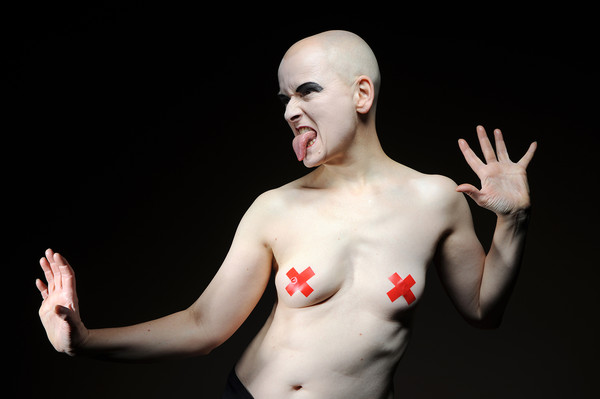 Bridge Markland: king-ing the drag - drag-ing the king con-structing the bridge - de-constructing gender. Performative, playful and bilingual (German/English), the Berlin-born gender performance legend Bridge Markland lets us take part how she did experiments with clothing and disguise in Berlin and New York City in the 1990s which led to her most famous gender performance.

The Berlin performer Bridge Markland is a virtuoso of roleplay and transformation. An artist who effortlessly crosses boundaries between dance, theater, performance, cabaret and puppet theater, her speciality are gender performances in which the change of woman to man (or vice versa) can be experienced. Markland is pioneer of drag and gender performance in Germany and has organized Drag King events, tours and festivals since 1994. She has toured her productions in Germany, Europe, the USA, Canada and Australia. Her main focus are collages of classical German theater pieces with pop music – performed as lip-synced solos using role change and puppets plus short performances: silent movie expression, drag, erotic comedy, audience interactions. Alongside her solo performanes, she also works for other companies.

The Brotfabrik Bühne (Bread Factory Theater) in the Weißensee district of Berlin is an independent venue for touring shows and co-productions from Berlin's independent performing arts community as well as national and international groups. The schedule of programming, comprising around 300 performances a year, presents a diverse range of forms and genres from plays, performance, dance and musical theater to improvisation, puppet and object theater. Young artists and groups regularly perform in the 40-80 seat auditorium alongside established theater makers. Another focus of the schedule of programming is the productions for children.