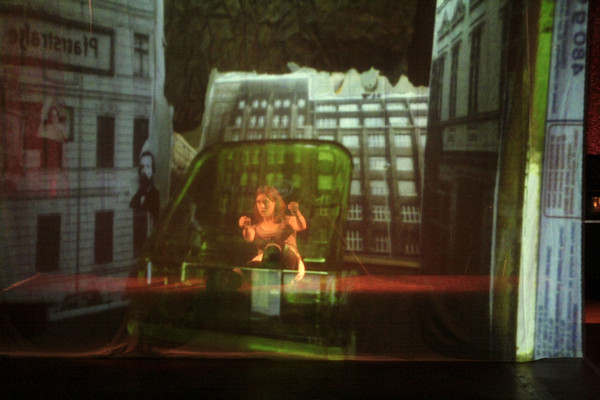 Improvisation is the possibility to create something new right now – for and with the audience. We play with the visual perception: on a curtain made of gossamer gauze, we conjure up projections using the objects given to us by the audience.  Film Riss Theater makes the dream of entering movies and becoming part of an exception, magical world come true.

Funded by the Cultural Fund of the Capital City (Hauptstadtkulturfond).

Film Riss Theater has been evolved from the collaboration of Miriam Sachs with artists from different fields. The artistic team always focuses on the interfaces of various disciplines, enjoys staging contrasts and is interested in the interaction between theater and film. Often, the productions are based on literature (such as Kleist or Kafka). The team is interested in finding new perspectives on the material and has began collaborating with scholars in recent years to do so.

As a Berlin venue for the theater of things, Schaubude Berlin has become a central platform of the genre and garnered international attention since it was founded in 1993. The program unites different aesthetic approaches to contemporary puppet, figure and object theater and presents the work of Berlin-based theater artists alongside national and international guest productions, especially during the international puppet and object theater festival Theater der Dinge.There is also a strong focus on supporting the next generation of artists, for instance in collaborations with the Ernst Busch Academy of Dramatic Art and with the special section of programming Junge Szene, or “young community”. In addition to presenting some 300 performances per season in the children’s and evening programs, as well as staging festivals, Schaubude Berlin offers a broad range of theater education activities and discursive formats to teach artistic processes. Beyond this, the theater also initiates numerous cross-genre encounters and thematic focuses. Schaubude Berlin was the recipient of the 2017 Theaterpreis des Bundes prize.