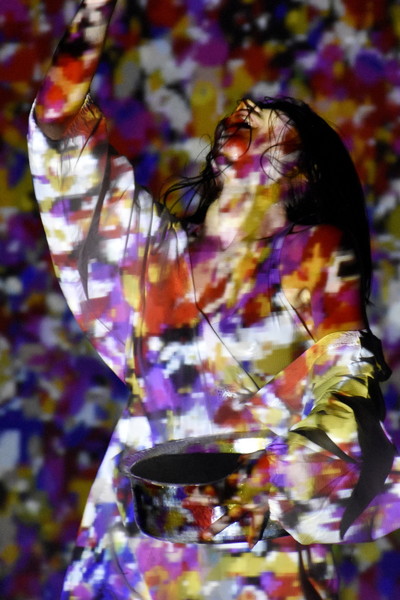 Worlds meet here! Musical, sensual, aesthetic and traditional. Framed and supported by the modern visual power of mapping as well as the musical transference from high culture and pop culture, we will become acquainted with the Japanese dance form kagura. The ancient legend of a goddess in a dance of liberation for the light presents itself to us as a spectacle of the present.

Sat.
19:00
ca. 45 Min.
Venue:
Theaterdiscounter, Klosterstr. 44, Mitte, 10179 Berlin
BVG: U-Klosterstraße or S+U Alexanderplatz and U+S Jannowitzbrücke + 5 minutes by foot. Unfortunately, we can only accept payments in cash. Note on accessibility: we ask our guests to contact us in advance to clarify any questions of accessibility.

Elektro Kagura is an interdisciplinary artists' group founded in 2016 that lives and works in Berlin: Ichi Go, a female Japanese dancer, Yukihiro Ikutani, a Japanese scenographer and visual artist, and Axl Otl, a French composer. Yukihiro Ikutani has created a new stage design method for Elektro Kagura: using a projector, pen tablet and computer, he paints and projects images on the stage and the perfomer. The aim of Elektro Kagura is to create a double dialogue between two epochs and two cultures through a fusion of contemporary dance, digital projection and electronic music. On the one hand, between the sacred dance form of kagura and the modern subculture, on the other hand between Japan and Europe.

Theaterdiscounter, or TD for short, is a theater located at Alexanderplatz with a year-round schedule of programming. The schedule of programming is dedicated to contemporary spoken word theater. Some 30 to 40 different productions, formats and festivals can be seen each season. To make this possible, TD cooperates with artists, theater collectives and partner theaters throughout Germany and internationally. At TD, experienced theater makers create theme-centric pieces of theater that expand aesthetic formal languages. As a theater and production location, we also provide a platform for the next generation of artists. A flexible space concept allows research into new presentation forms for live art and theater in all of its facets.