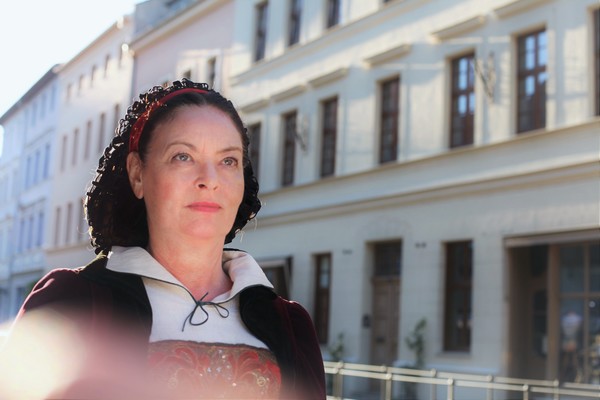 The Revelations of Luther’s Sweetheart

Interweaving words sung and spoken 500 years ago, embedded by modern soundscapes, paint a picture of the turbulent life of Katharina von Bora. The former nun became mother of six children and entrepreneuse, when she fled from the monastery and married church reformer Martin Luther. In personal episodes light is shed on this extraordinary time in Germanys late Middle Ages on the brink of Renaissance.

After their studies at the Ernst Busch Academy of Dramatic Arts Berlin, long-term engagements followed on Bühnen der Stadt Magdeburg, the Berliner Ensemble, Theater 89 in Berlin, Klassik am Meer and at Shakespeare & Company in New York and Boston. Angelika Perdelwitz has performed numerous leading roles in feature films and television films.

Bootschafft is a new theater in Pankow, located in the conference hall of the former Australian Embassy in East Berlin. Located at Grabbeallee 34 in Berlin Pankow-Niederschönenhausen, the building, along with the garden and tennis court, were completed in 1975. It was the location of the Australian Embassy in East Berlin until 1986. There were plans to tear down the former Australian Embassy in 2015, but the demolition was prevented when the district office of Pankow placed the building under landmark protection. This brought about a restructuring, during which the owner has allowed the interim use of the building as a location for artist studios. Atelierhaus Australische Botschaft (OST) was founded in April 2017 and comprises a group of more than 30 artists working in the fields of visual art, theater, performance, literature, music, photography and dance.