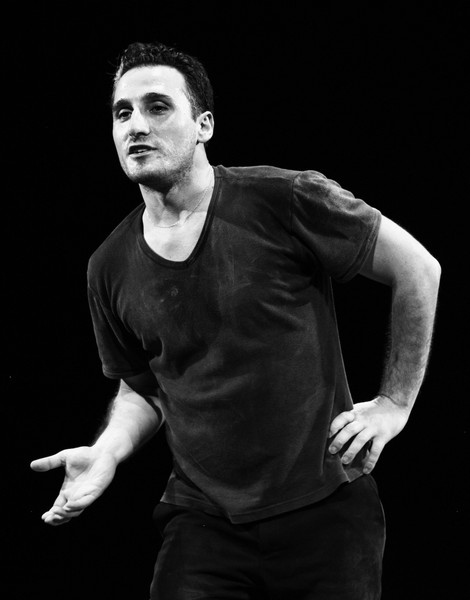 The will is the essence of the noumenon

In The Story of a Tiger by Dario Fo, Andrea Posca found exactly what he was searching for: a play that mirrors his personality and emphasizes his talent for acting. With his interpretation of the play, Posca remains true to the idea of the “one-man play” by eschewing scenic elements. The scenic change is evocated only by the change of the intonation of his voice and acrobatic elements.
The performance is canceled on June 9, 2018.

Andrea Posca was born the September 20, 1985 in Corigliano Calabro (Cosenza, Italy). At the age of 22, he began his studies at the drama academy Scuola di teatro Colli in Bologna. After he graduated, he received a Master’s of Arts in Rome at EUTHECA – European Union Academy of Theatre and Cinema, Rom. He is a multiple award winner of Italian theater competitions such as the Monologue Festival of Cassano allo Ionio and Rogliano in the province of Cosenza. In January 2014, he moved to Berlin to broaden his horizions in the art world. It was in Berlin where he decided in 2016 to revive The Story of a Tiger.

The dream factory of the German film industry transformed into a green cultural oasis in the middle of Berlin – a space for creation, for innovative ideas, an inspiring surrounding for artists from all over the world. Art and culture are at the core of the ufaFabrik. The international cultural center runs two podiums for artistic productions: the grand theater and the historical film theater, known today as Variété Salon. The schedule of programming showcases a wide range of artistic and music genres from theater to stand-up comedy, from Brazilian percussion to German singers. From June to September, international guests and festivals are presented on the open-air stage. Coming from Argentina, Korea or France, various artists guarantee a great summer at ufaFabrik. Along with its yearly schedule of programming, the cultural center fosters artistic creation and expression by supporting numerous initiatives. For example, the children circus gives young talents the opportunity to attend workshops or classes in juggling, acrobatics and clowning and to be in the spotlight during the circus festival. Moreover, the ufaFabrik is home to Germany’s foremost samba band, Terra Brasilis, which has performed throughout Germany, Europe and Asia. Social commitment and innovation are also among the main concerns at ufaFabrik. The neighborhood enter NUSZ offers courses, workshops and conferences about social and personal issues, especially for infants, young parents and elderly people.