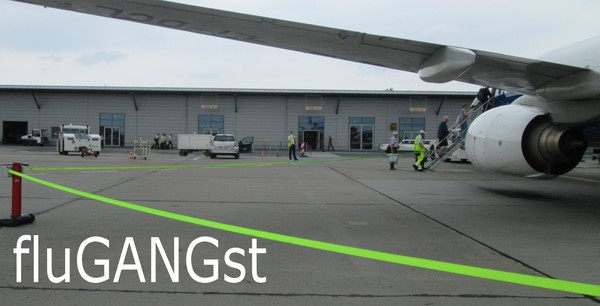 With its second dance piece, fluGANGst, the ensemble GANG explores group behavior in a new context. Flying is cool, the perfect environment to enact our cosmopolitan self. An ultimate symbol of freedom and independence. Really? Airports and airplanes are the perfect stage on which our contemporary freedom and individuality are paradoxically played out.

In 2017, the ensemble GANG presented their eponymous first dance piece. GANG explores the interplay between individual and group behaviour using a distinct movement language developed from everyday and pure movements and a score of tasks that can only be fulfilled collaboratively. The ensemble draws from common know-how in real-time composition, strongly informed by the postmodern dance currents emerging in New York in the 1960s which made the body and its movement the main topic of dance. GANG approaches settings and situations to extract movements, spatial patterns, rhythms and dynamics out of which the choreographies are built. The result is far from representation yet evocative, the dance is pragmatic and at the same time fresh and lively.

Acker Stadt Palast in Berlin's Mitte district is a place where established artists and newcomers meet to experiment and reflect upon contemporary discourses. The focus of the venue, established in 2012, is on the connection between contemporary dance and new music. Acker Stadt Palast offers the independent performing arts community a novel interface between these art forms while also being interested in diverse aesthetic forms of dance and theater.
Acker Stadt Palast is the venue of the registered association Freie Bühne Mitte (Independent Theater Mitte). The members are theater makers, musicians, actors, theater technicians and academics working within the humanities who have been responsible for the schedule of programming and operation of Acker Stadt Palast since the summer of 2012. The theater's survival is ensured by an indefinite rental agreement with the residential and cultural project Schokoladen - a unique situation for a cultural project located in Mitte.
In 1990, artists squatted the former chocolate factory on Ackerstraße, where they opened a bar and theater. They organized concerts and readings and quickly gained a large, loyal audience. Between 1993 and 2013, there was a bitter fight with the building's new owner which was finally resolved in 2012 with the continuation of the project thanks to the support of the Berlin Senate and an exchange of property.