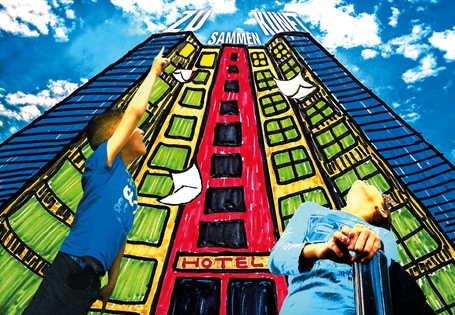 A legend tells of a distant land of peace, happiness and freedom, in which individual wants and social solidarity coexist.  The map leading to this place was torn apart, the pieces scattered.  Since then people have wandered helplessly, searching.In a former hotel high over the roofs of Kreuzberg, a portal opens into the long-forgotten world of the legend.  Where are the real pieces of the map?  What is burning in the fireplace?  Who is telling the truth?  Where is the key, and what kind of world is hiding behind the locked door?

“Once Upon Tomorrow…” is a production by Sisyphos, der Flugelefant (SdF) funded by Hauptstadtkulturfonds. In cooperation with ZUsammenKUNFT, Theater O.N. and PAF* – The 2018 Berlin Performing Arts Festival (June 05 -10, 2018).

Sisyphos, der Flugelefant (SdF) is a project-based independent group, founded in 2008 in Berlin by the theater director Chang Nai Wen. Despite the diversity of the SdF projects, from theatrical and site-specific performances to live art to documentary films and sound- space-video installations, it is always about the founding philosophy: direct, participatory, and collaborative. In different venues in Berlin, Leipzig, Feldkirch, New York, Rome or Taipei, SdF leaves traces with their various formats, generating communications not only between performers and spectators but also among the audience members. In an immersive environment, socially and politically relevant topics are thus not only made visible but experienceable.

ZUsammenKUNFT is a model project for integrative living and working for culture makers, new Berliners seeking refuge as well as old Berliners and is located on the 15th and 16th floors of the DRK emergency accommodation building.