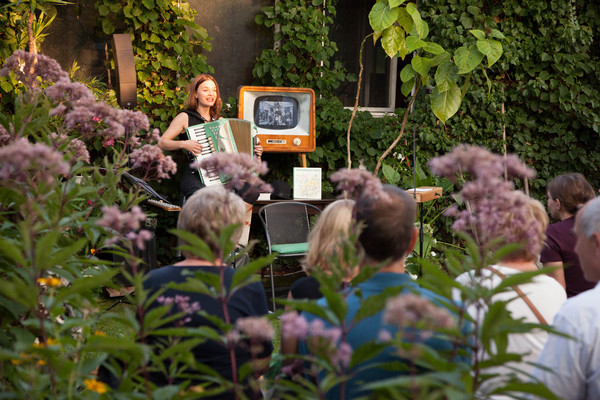 ANNIKA VON TRIER shows a portrait of the Dadaist Hannah Hoech in their real garden. With lyrics from the diary of the artist, songs on the accordion written for her and inspired by the Dadaism, moonwalks on a theremin, a reading-singing-show accompanied by a television from the sixties.

Thanks to the family Bauersachs and to Archiv der Berlinischen Galerie

AnniKa von Trier works as a performance artist with voice, accordion, literature and humor. She was a dramaturg and assistant director at Volksbühne am Rosa-Luxemburg-Platz from 1992-94 before she began creating her own productions in 1993. Since then, she has performed her stage characters Palma Kunkel, Die Handtaschenträgerin, Mademoiselle Papillon and AnniKa von Trier at theaters and festivals in Germany, Austria, Switzerland, USA, Australia, India, Italy and more.
In 2017, she premiered her Dada performance #DIPTAM # DADA #DIGITALIS or I will not shut up my Loewenmaeulchen – Hommage to Hannah Hoech. She performs her own songs RIGHT NOW! solo and also in a trio with Kalle Mews (drums) and Yoyo Röhm (bass).

Hannah Höch purchased the property with house and coach house on Wildbahn 33 in Berlin-Heiligensee in 1939. She lived and worked there until her death in 1978. The most well-known German artist of classical modernism, she created a unique collage garden in addition to her visual work for almost 40 years. During the Second World War, the house and garden served as a hiding place and food source providing the necessities for survival. The entire grounds were provided landmark protection as an historic monument by the Berlin Landesdenkmalamt in the 1990s. In 2005, the artist Johannes Bauersachs acquired the estate with the help of family and friends with the well-accepted obligation to continue and maintain the house and garden in the memory and meaning of Hannah Höch.