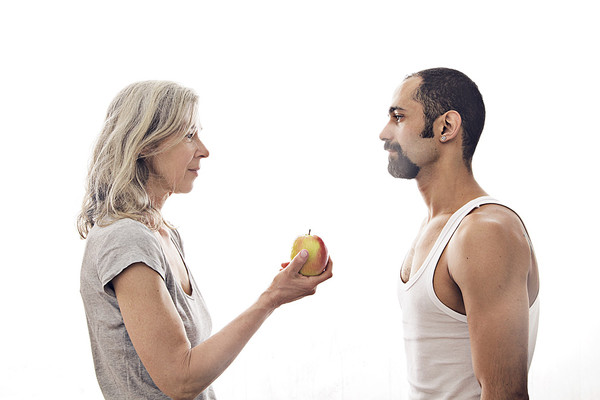 The Variety Café of Studio K77 is an evening of performance delectables, featuring short performances from a wide variety of genres: dance, theater, music, performance and everything in between. The event attracts artists from Berlins’ various experimental performing arts scenes, as well as both established and up-and-coming artists.

Liz Erber creates original, body-based dance and theater performances for stage, site-specific locations and film. Her performance work ranges form pure contemporary dance to original plays incorporating dance, theater, live music, video, and audience interaction; from street dance to the integration of historical forms of dance; from working with professional performers to integrating non-professionals, and groups, like youth from the Snoqualmie Indian Tribe in Washington state (2006). In addition, she enjoys collaborating with people from different fields, disciplines, and walks of life. One of her main interests in creating work is to draw new and unexpected connections between people, themes and genres. Working with juxtaposition creates new insights about ourselves, others and our environment, as well as laughter.
Liz, originally from the United States, has been living and working in Berlin since the middle of 2008. Her work has been shown at a variety of venues in Berlin, including English Theater Berlin (2013, 2014, 2015, 2016), Sophiensaele (2014), ada Studio (2010, 2011, 2013), Tanzfabrik (2010, 2013), K77 Studio (2009, 2011-16), Eden*****Studios (2014), amongst others.
Liz holds a Bachelor of Arts in Dance (2005, University of Washington), a bachelor of arts in Theater Performance, Theory and Production (2005, University of Washington), a Bachelor of Arts in Liberal Arts (chemistry major with a language certificate in French), a Certificate in Laban Movement Analysis (CLMA) and Somatic Education (2011-15, Eurolab, Berlin), and is a classically trained violinist. Since 2000, she has worked part-time in the fields of publishing, writing, editing and translation (Spanish, Brazilian Portuguese).

Hilla Steinert shifts between dance and performance art. She started her dance studies 1978. In the mid 80s she got involved with performance art. Since 1989 she established herself as a freelance artist in Berlin. She creates her own work, performs in the work of others and teaches internationally.

Amr Karkout is a dancer from Syria. His dance lives from his openness and curiosity for new ways of expression and his rich experience in Contemporary Dance.

Sven Seeger works as a choreographer, project initiator, and dancer He createes dance and performance works in Berlin’s independent, “freie Szene”, in theaters and public spaces. He is a dance and performance instructor, as well as a project director, in various dance and culture houses. Since May 2015 Sven is a member of the directing team at Gärtnerie and directs projects at Schlesischen 27 for refugees and members of the neighborhood.
Sven studied dance at the Ballet Rambert School in London and the Folkwang Hochschule in Essen. He was there after involved with the Ismael Ivo Company / DNT Weimar, the Ballett Company Chemnitz as well as with Julie Bougard, Isabelle Schad, Jochen Roller, Felix Ruckert, Daniela Kurz, Paulo Castro and Susanne Lietzow, amongst others.
Sven Seeger’s works have been presented in various locations including ARCUB Bukarest, DNT Weimar, De Vorst Tilburg, Sophiensäle Berlin, Dock11 Berlin, Voxxx Chemnitz, C.C. Jaques Franck Brüssel, Dance Kiosk Hamburg, Podium for New Dance Potsdam, Rote Fabrik Zürich and as part of the Cultural City of Europe 99 in Weimar.

Anna-Lise Hearn is a dance artist, teacher and award winning choreographer from London UK now based in Berlin. She has choreographed and produced many collaborative projects and commissions; commercially and artistically. Her work is deeply rooted in collaboration. She has an open curiosity to the creative process, and a deep fascination with the exploration of the body, as a tool for communication and artistic expression.

Katherine Leung is a choreographer, designer and performance maker. She has extensive experience in back stage, working in original productions from start to finish; these include design, producing and movement directing. Her work utilises both dance and design as mediums for performance making, to investigate and challenge the reception of themes and concepts.

K77 Studio is one of Berlin’s small, alternative spaces with an illustrious history. The studio was built by an international group of young performing artists, who squatted the abandoned building after the fall of the wall. Since it’s beginning, the studio has been home to a wild variety of experimental, dance, and improvisational performance forms.
Today the studio is run by a non-profit collective and continues to host performance evenings, organized by members of the studio and artists-in-residence. Each month the studio runs its Variety Café Berlin, which features short pieces and works-in-progress from international performing artists working in dance, theater, music, and/or everything in between. The theater improv company, Scratch Theater, also hosts a monthly show in the studio.