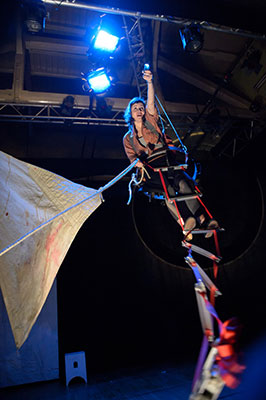 What if there was a war – not somewhere far away, but here in Europe! The democratic system has collapsed and fascist dictatorships have taken over. You are leaving everything behind and flee. In an Egyptian refugee camp you and your family are trying to start a new life. But, since you have no visa, you are not allowed to go to school, can’t learn Arabic nor get a job. You feel an outsider and are longing for home. But – where is home? Together with actors and visual artists, Anna Vera Kelle set out to create a theatre experience that gives the audience a tangible sense of life as a refugee. In doing so, she addresses issues such as respect, empathy and the willingness of individuals, peoples and generations to take a step towards each other.

by Janne Teller
From the Danish by Sigrid C. Engeler

In cooperation with the University for Music and Performing Arts Frankfurt am Main (HfMDK).

A privately run theatre, we have been able to establish ourselves within Berlin’s extremely dynamic theatre scene as one oft he region’s leading theatres for young audiences.
Since starting out in 1987, we have entertained some 500.000 people with over 2.500 performances, including 40 premieres.
Our audiences span all nationalities und cultures, religions, genders, sexualities, ages, and whatever other grouping or identities there are.